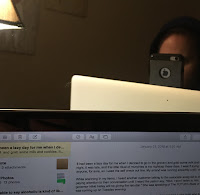 It had been a lazy day for me when I decided to go to the grocery and grab some milk and cookies. It was a Monday night, it was late, and this little ritual of munchies is my nightcap these days. I wasn’t trying to see anyone or talk to anyone, for sure, so I used the self check out line. My errand was running smoothly until I made a terrible mistake.

While scanning in my items, I heard another customer talking to the associate assigned to monitor the kiosks.  I wasn’t paying attention to their conversation until I heard the patron say, “Well, I won’t listen to him, but I’m excited that our governor Nikki Haley will be giving the rebuttal.” She was speaking of The POTUS’s State of the Union address that was coming up on Tuesday evening.

The shopper was a small lady who stood about 5 feet, four inches and had a slim build who looked to be in her early 60s. I first caught a glimpse of her when I heard her comment and looked over my left shoulder purely as a reflex. I did not want to engage in that conversation, for sure. Being in South Carolina my entire life, Ive grown quite used to not having the same ideology as most people in the area. For years, I have just kept my mouth shut as often as possible.

That’s when the patron (I’ll call her Rush, as in rush to judgement) caught my eye and asked me a question. While nodding her head in the affirmative, Rush asked me, “Aren’t you excited?”

Still, trying to avoid any conflict I pretended to be unaware of what she was talking about when I replied, “Excited about what?”

Again, Rush nodded her head assuming that I would agree with her sentiment and tried again.
“Aren’t you proud that Governor Hayley will be representing our state tomorrow night?”

The question just hung there as my mind fought with itself.
‘Do NOT respond to her’, said logic.
‘Let it go, Donnie’, said the voice that just wanted milk and cookies.

Rush was appalled and disgusted if the look on her face indicated anything.

Fuck. Why did I do this?, I thought as I inhaled deeply through my nose and held my breath while I tried to conjure what I would say next. I decided to try a vague response.

“I think she is against her own kind”, I replied while my thoughts told me that was a terrible answer. “What I mean is that she doesn’t represent the best interests of women and minorities.”

—Here, I feel I should t note that the rest of our exchange unfolded exactly how I am retelling it here. At least, its as exact as my memory will allow.—

Rush was on her way to the exit and we were separated by a display and the scanner that I was standing in front of. Now, she took a step toward me.

“Do you mean to tell me that you are against huge private corporations without unions, and you want free health care for everyone?”

I wasn’t sure if she was being sarcastic.

“Actually, that is one of the things that bothers me about Haley”, I replied. “Nikki is now complaining that South Carolina’s Medicaid budget is coming up short. However, she seems to have forgotten that she rejected federal medicaid expansion money to spite the POTUS (President Of The United States).”

“Well, you know that any government money comes with strings attached”, said Rush. She was pointing her finger at me while she continued. “Besides, anyone can get healthcare. Anyone.”

“That’s not true”, I said. “I fall into the gap…”, I began but she interrupted me. I planned on explaining to her that I fell into an income gap where I make too much to qualify for any assistance from the Insurance Marketplace, but also make too little to afford the regular premiums.

“Yes, it is true”, she sounded. Her voice was elevating and I could see the grocery store clerk was getting nervous. “Even alcoholics and drug users can get treatment.”

“I know,” I acknowledged. She didn’t know I am a recovered alcoholic.

“Anyone”, she repeated. “All they have to do is go to the emergency room.”

Rush cut me off, again. This is when I would have said something about being screened for colon cancer or having prenatal check ups.

“You think EVERYONE is entitled to health care?”, she asked.

“Obviously, you’ve never been poor or hungry in your entire life”, I responded. My thoughts said, ‘Ah! You made it personal, Donnie! You know better.”

“What?”, she was getting angry. “Ive been poor, mister. I was in the bomb shelter!”

“What bomb shelter?” I was confused. “What are you talking about?”

“The Cuban Missile Crisis”, she reacted. “I was in New Jersey!”

“What does that have to do with anything?”, I asked.

“That’s not the way our forefathers wanted it. That’s not in the Constitution that founded our Christian America.”

I couldn’t help scoffing when I informed her, “That is not true.”

“That America was founded as Christian country. Those words are nowhere to be found in The Constitution.”

“It is so true, mister. That’s why the colonies settled here. Because they couldn’t practice their religion.”

“That’s not true either. The first settlers came here because the Catholic Church wasn’t puritanical enough for them.” I attempted to inform her.

At that point, sweet little Rush came around the display that separates us and stepped within arm’s length of me. She was angry as she continued to extend her index finger so that it was almost touching my arm. That arm, my left arm was busy trying to swipe my debit card and get out of there. While doing that I opened my right palm and swung it underneath my left elbow giving Rush the universal sign “leave me alone and back off”. With my paw opened toward her face I said, “I’m sorry. I shouldn’t have talked to you. Will you please step away from me?”

“You step away from me!”, she shouted.

“I haven’t moved and I’m trying to complete my transaction”, I said as I looked over my shoulder in hopes of a little help from the store employee. The clerk was already on the phone.

During all of this, I botched my attempt to pay with my debit card and had to start over.

“Would you please step away from me? I just want to get out of here”, I pleaded with Rush.

Now, sometimes in life our mouths say things that our brain’s try to tell us not to. But the timing is off. We’re already in the middle of saying it. Some people call it word vomit. This was one of those moments for me.

Just then, the manager of the store was getting the low down on what was going on from the clerk.

Rush was pushing her cart out the front door.
“You stupid liberal! You’re going to Hell!” she prophesied as she exited.

I’m not telling this story to argue one way or the other on any political issue or religious view. What bothers me the most is that this woman felt compelled to behave in such a way. Everyone is so fucking mean to each other, I can hardly bear it.

I only hope that we can reverse this path of self destruction. We are all falling for it. If we’re mad at each other then we don’t even notice who is really in charge of this ‘democracy’.

Some of us just want milk and cookies (and healthcare).