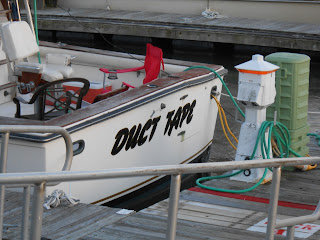 My home health nurse completed her first visit with me at my mother's house.  As she packed her medical equipment, she had one final task for me before she could move on to the next household.  She needed my signature to verify she had gone over my vital signs with me.  As with most people, asking for a signature is not a hefty ordeal.  However, with little control of my nervous system, it was a complicated task for me.  Luckily, my autograph typically looks like a decipherable drawing done by a toddler, so there was no need to sweat it.

From November 18, 2011 on, my mother was to be my primary caregiver.  With that, the nurse spoke to mom at a minuscule volume, as if the nurse was whispering to her confidentially.  I could hear a few truncated words, and phrases.

The nurse had a three ring binder of material, and notes for my mother to refer to, if needed.  I heard the word hospice, again, and I still did not know what that implied.  The only connection I could make was 'hospitality', after working in the food and beverage industry for my entire adult life.  I was sure I was better off left in the dark when it came to things that were supposed to make me comfortable.  It never sounded pleasant when nurses and doctors discussed my comfort level.

Soon after the nurse departed, a physical therapist arrived.  I had already expressed that there was no need for a personal motivator for me to accomplish walking.  I surmised I could take my rehab one step at a time.  Literally.

I had no desire to attempt the aluminum walker that the hospital sent home with me.  The back legs of the upright stroller had rubber stops on the ends, and the front had wheels made of the same unwieldy material.  It was a momentousness challenge to utilize the awkward contraption on the squeaky smooth hospital tile.  To take on the carpeted terrain of my mother's living room was silly, in my view.

When the walking coach arrived,  her look was suitably akin to my assistant in the hospital.  She was about 5'3", and notably strapping.  Her arms were not masculine, but I could tell she pumped iron.  She had a typical southern girl appearance, with neck length straw colored locks, and a golden palmetto tree pendant to match.

All of the tools my handicapped body would need were still in the living room.  I had my very own brand new wheelchair.  Its chrome was lustrous, and the polished black vinyl seat could have been in an Armor All commercial.  My aluminum walking trekker remained in the packaging it was shipped in, and wrapped tightly  in clear duct tape.

The hospital did not fail to issue another parting gift.  It was a portable commode.  With that precious item, I was free to dump in any room I found to be the most convenient.  The catch was, if I decided to take advantage of my mobile manure bucket, I would have to clean it out.  Merely standing for too long would usually make me nauseous, and I did not trust my balance to lean over a nomadic, soiled toilet.

The first procedure we embarked upon revealed my skill level, or lack thereof, on the walker.  By then, my muscles had grown thinner and more atrophied than they were previously in the hospital.  I required a helping hand to pull me up into a sitting position, and another hand between my shoulder blades to hold me steady.

Once I was standing upright, yet hunched over, I had to lock my elbows open to hold myself up.  I dragged the walker only a few feet before I had to quit.  The therapist supported my trip back to the sofa, and I dropped swiftly onto the cushion.  After that, I was certain I would not be using the walker in the house.

My assistant adjusted the height of the stroller for the elderly while I schemed how I would get around without it.  I concluded I would hang onto varying walls and furniture, like a child in the deep end of a pool, if I ever needed to be somewhere else in the house.  I knew that I would not be leaving the couch often, and I sensed taking trips to the loo without the walker would be more dangerous.  I was willing to risk a fall now and then, if it saved me time and effort.

We then turned our attention to the wheelchair.  I was grateful the therapist did not ask me to have a seat in it.  She agreed that I would not be using it in the house.  I almost didn't receive a wheelchair.  The hospital personnel were ready to discharge me without providing any supplies I would need for short trips.  The staff did not take into account my inability to even exit my mother's car.  It seemed once I was in the car and out of their hospital, I was not their problem anymore.

From my perspective, the chair appeared as if it were made for a small person.  The thought did not cross my mind that I was a small person.  I weighed 150 pounds, and at least twenty pounds were in my abdomen.  Otherwise, my body could be put on display to show examples of different sizes and shapes of bones that make up the human skeleton.  To appease me, the therapist pointed out all of the various clamps, and extensions that would be adjusted to a more suitable size for me.  I immediately forgot which items she demonstrated.

Finally, she presented my portable latrine like one of the girls on The Price is Right.  It was made of untouched, hard plastic that was the color of slate.  The supports curved around to make two inflexible arms, that were attached to aluminum with a dull sheen.  The therapist lifted the lid, and demonstrated the removable bucket.  Subsequently, I decided there would be no wear and tear on this utility.  I was not going to shit in a pot in the living room.

The therapist then produced a plastic bottle that I could employ to relieve urine pressure.  What she did not know was that my penis was still too shriveled from the nearly complete shutdown of my body.  There was no way I would be able to manipulate myself, and pee downward over the lip of the jug.  I was sure that if I attempted such a maneuver that I would piss everywhere except for the canteen.  The entire scenario gave a brand new meaning to the term "whiskey dick."

While the physical therapist wrapped up her presentation, she asked if I would like set up a schedule with her.

Another stubborn decision had been made by me, and I never saw that therapist, again.