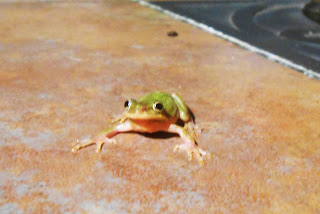 Although I was no longer in the hospital, where I was provided with 'round the clock care, I continued to have a small tether to professional health care.  On November 18, 2011, it had only been a month since my liver shut down due to my destructive love affair with vodka.  A home health nurse was assigned to me, and when she first arrived, I wasn't sure what to expect.  Meeting someone new was embarrassing, unlike when I was in a hospital setting, and had given up all humility.

On the previous day, the first at my mother's house, I caught a real look at myself in the mirror for the first time since I fell into the coma.  There was a mirror in my hospital room, but I made sure I only caught glimpses of myself.  I knew that I did not want to know how frightening my deteriorated reflection was.  It was my belief that the least I knew about how dire my condition was, the better.  Otherwise, I feared I would begin to dwell on the negativity of my situation, and become more prone to accepting death.

Like most bathrooms, the one at my mother's house has a mirror over the sink.  It encompasses most of the wall running sideways along the right wall, directly across from the shower on the left.  I had to struggle to hold myself up on the sink counter to make my way to the toilet.  During that endeavor, and pausing to suck the oxygen out of the room, I was standing in front of the looking glass.

I gathered a prolonged stare into my own eyes.  Before my final reckoning with the vodka, I had begun to gaze into my pupils nearly every morning, after getting home from work at the bar.  It was never a look of vanity, but a chastising of myself for the utter disappointment I had set myself up for in the long term.  Sometimes, I would speak to myself.  "What are you doing?" I would interrogate myself.  "You continue to live in the moment.  For what?" I would ask myself.

In November, it was different.  The person staring back at me was almost unrecognizable.  My greasy, unwashed hair had not been trimmed in at least three months.  My face looked like one of the people in Tim Burton's film Beetlejuice, not Alec Baldwin, but one of the deceased in the waiting room.  My skin was incredibly jaundiced, and could have readily passed for a spray tan gone horribly wrong.  My cheeks and mouth appeared as if I had never smiled in my 38 years on Earth.

In that moment, the questions were similar, but more condescending and disciplinary.  "What have you done?" I asked myself.  "You knew you were fucking up, but you just had to keep going, didn't you?" I continued.  "No woman will ever look at you, again.  And, your penis is busted and shriveled.  Are you happy now, funny man?"  I was completely disgusted with myself.

With that, I knew what others were catching a glimpse of when they met me for the first time.  My home health nurse, and all of the staff in the hospital, only knew the man who looked like he was in his sixties.  When the nurse arrived at my mother's house, I was lying on the sofa.  Aside from the enormous water balloon encased in my abdomen, I was skin and bones.  Still, the couch was barely wide enough for my thin frame.

When the nurse approached me on my apparent death bed, she had a radiant smile with shiny, jet-black curls grazing her amber cheeks.  I guessed her to be younger than I was, and contrary to myself, she had her shit together.  She was dressed appropriately sharp, with a snug fitting business skirt, and jacket.  Her untouched, white running shoes were the tell-tale sign that she was someone in medicine.  She told me her name was "Keisha".

First, Keisha needed me to sit up, and be a less cumbersome patient.  I still couldn't lift myself up without assistance, and my response to such a request was always to reach my hands out like a child asking for help.  After a considerable effort from both of us, I was prone enough for my check up.

"Hold this under your tongue, sweetie," Keisha said as she placed the digital thermometer in my mouth.  She asked for my arm, and I immediately began to scan my arms for a serviceable vein.

"No, no," she said.  "I only need to check your blood pressure."
"Oh.  I have grown used to being poked, and prodded," I reported.
"I understand," Keisha expressed.  "I won't be doing any of that."

Instead she slipped a blood pressure cuff up my puny arm, and tightened the Velcro to its smallest diameter.  The blood pressure instrument was of the hand pump variety.  Keisha had to squeeze the balloon at the end of the hose to achieve the correct amount of inflation.  She placed the stainless steel stethoscope on my arm, and pressed it on my vein with her thumb.

Meanwhile, she attached a sensor to my middle finger to calculate how much oxygen I was absorbing, or lack there of.  When the thermometer beeped, it read 96.3 F, and it was no wonder that I felt as if I were in a ice bath for over a month.  The red L.E.D. on the oxygen sensor reported a 94% absorption rate.  That was also no surprise as I consistently felt out of breath, and was dangerously ill.

My blood pressure was at 98 systolic, and 61 diastolic.  I thought reading was low, but I was unaware that the physicians had been struggling to maintain my blood pressure at a normal  level.  When the emergency technicians found me unconscious in my bedroom, they reported my pressure at 82 over 35.  Therefore, I had improved in that respect.

Finished with those measurements, Keisha checked my respiration rate, and it was 20 breaths per minute.  Before my liver failed, my normal was approximately 14 per minute.  She inquired if I had been urinating, and also when I had my last bowel movement.  After that, I told her my pain level, which I guessed at a 7 out of 10, and she began to pack her things.

I was perplexed, and instantly concerned about the amount of care I would not be receiving.  I had not set any expectations about it, and it was more of a wakeup call.  That was when I knew that things were going to be much different than they were at the hospital.

That was the first moment I began to think that I may have left MUSC Hospital too soon.  The unwieldy guilt began to sink its teeth into me, again.

I was absolutely helpless, and it was self inflicted.

I wasn't invincible after all.