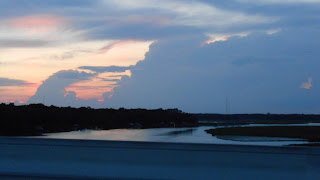 After a lengthy, difficult, and unexpected recovery, I am once again, a resident of Charleston, South Carolina.  In October of 2011, my excessive drinking, which had grown into a physical dependence to alcohol, caught up with me.  My esophagus ruptured, my liver failed, and I fell into a coma.  I spent 30 days at MUSC Hospital, and once there were no more tests they could run on me, I was released.  I was forced to move into my mother's house in Beaufort, South Carolina.  I could not care for myself.

The amount of knowledge I have gained in the past ten months has been extraordinary.  I now realize that when I left MUSC, the physicians did not presume that I would survive this ordeal.  As a matter of fact, when they signed my release, the hospital staff was sending me home to die.  According to my mother, I was not expected to make it through the holidays.  When the time had come for me to leave, my health was not much better than it had been when I arrived.

Two weeks ago, on August 2nd, I had an appointment at MUSC to have an endoscopy, and capture some images of the current state of my throat.  The nurses, and anesthesiologist were obviously confused about my reason for the procedure.  The only information they had about me was from my first scope in January.  Numerous alerts, and warnings were appearing in my records for cautions against a weakened immune system, diet recommendations, and a mixture of problems due to encephalopathy.


The misunderstanding continued until the attending physician arrived.  He told his staff that they, "don't normally see someone" with my diagnosis.  "Guys with a condition like his are typically dead, by now," he said  The change in their facial expressions revealed their moment of clarity.  In October, my liver had become so blocked with scar tissue, that the blood flow in my portal vein was actually running in reverse.  They banded the wound in my throat, immediately.  During the first checkup in January, my esophagus had nearly healed completely.  Everyone was surprised and impressed by the recovery.  The rupture should have been my death blow.

After my procedure two weeks ago, it was clear that my larynx had fully healed, and it appeared as if nothing  had ever happened.  On top of that, I now have a ravenous appetite, and I am gaining muscle weight, instead of water weight.  I am able to work out, and I am no longer sitting on a couch in front of a computer all day.  The difference in my anxiety level is a tremendous relief, and I am sleeping deeper than I have in years.

Yet, my recovery was never supposed to happen.  Travelling from Charleston to Beaufort, that evening, was absolute torture, and my mind was heavy with the unknown.  I knew that I had an enormous task ahead of me, and the anxiety was already consuming me.  I was completely helpless, and I had an innumerable amount of people to contact.  It was apparent that an enormous amount of friends, and family had already heard that I had been to the hospital, but did not know the extent of my decline in health.

Also, during the trip south to Beaufort, I began to think about what happened, and what could have possibly led to my sudden demise.  I knew that I was drinking too much, but I never felt any kind of illness during the previous week.  I decided that I was given a second chance at life for a reason, and I was going to do something about it.  I set a loose plan in my mind, and came to the conclusion that I would do everything possible to regain my physical, and mental capabilities.

I needed my head to clear first, and I was sure my strength, and stamina would replenish with time.  I could use my mind to research what went down, and keep myself busy.  I couldn't be the only one that had suffered such a fate.  A lot of people I hung out with on a regular basis, drank as much as I did.  The difference was that they were younger, and already drinking at that rate.  If my liver failed at 38 years old, any of them could be next.

I am not sure if I slept during some of the ride to Beaufort, but it seemed to pass quickly.  I felt tremendous pain throughout the journey, but I was already losing touch with reality.  I had only been detached from the saline drip for about 90 minutes, and I could already feel my body struggling to maintain itself.  By the time the car pulled into my mother's driveway, I felt increasingly nauseous, and the fluid in my abdomen was pressed up against my diaphragm.

I struggled to open the car door, and I could not move my legs.  I tried to lift my right leg with both of my hands, and it didn't budge at all.  At that point, my step father, Ed, approached my side of the vehicle, and lifted me into his arms.  Ed suffers from excruciating leg pain, so this was no simple task.  My body appeared to be frail, however, my abdominal fluid added nearly twenty pounds.

When we entered the house, Ed placed me on one of the couches in the living room.  I scanned the room, and I tried to lie back.  I immediately felt the excess fluid jostle in my belly, and I winced in pain.

This was the first step, in what would be a lengthy recovery.