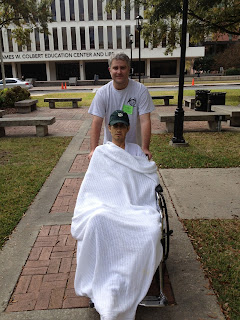 I am back home this week, in Charleston, South Carolina. July the sixteenth, will be nine months since my esophagus ruptured. Since the day my liver became excessively scarred, inhibiting normal blood flow, and causing excess blood pressure in my veins. What began as an occasional drinking binge in college, eventually devolved into my complete, physical dependence to alcohol. A relationship with hooch that I never considered possible, after watching my father succumb to the destruction caused by his fixation with booze.
This is my first extended return to Chuck-town, and visit for more than one night. I have been walking around the city, and it is a tremendous relief to feel some manner of normal. This is what the physician's told me that I would never experience, for the remainder of my shortened life. According to them, I should have been dead three months ago. Yet, I have been walking for hours at a time, and while climbing a staircase, I am able to ascend two steps at a time. This is another sign of my progress, and it is absolutely gratifying.
Last Fall, my younger brother was pushing me around in a wheelchair. Looking back, I can't imagine how that made him feel. At only 38 years old, I had become immobile due to excessive drinking. My 34 year old, baby brother was touring me around in the hospital courtyard, during what could have been a beautiful afternoon, tossing the football around.
Instead, I was wrapped as tightly as Hannibal Lecter in "The Silence of The Lambs". Encased in a blanket from my hospital bed, to hold out the chilly November air. I could feel every fragment of debris on the sidewalk, and under the wheels of the chair, as we circled the park benches. A pebble, an acorn, or even a small crack in the concrete, would send shock waves of intense pain, throughout my body.
I could feel the massive amount of abnormally retained fluid in my abdomen, while it jostled, and moved my guts to wherever there was room. It felt as if something was twisting my bowels into knots, and shaking my belly to the point of nausea. Meanwhile, I had lost a lot of bone, and muscle mass, and I appeared to be much older than I actually was.
Now, that I am back in town, it is not apparent that I was ever sick, or near death, for that matter. I still appear to be underweight, but otherwise it has been abundantly clear, that most of the locals I run into are completely unaware of what happened to me. The most common greeting so far has been, "DWT! Long time, no see." Sometimes, "I haven't seen you in awhile" is added to the exchange. Furthermore, it is not surprising that some have mentioned, "You're headed to the bar, I bet." I throw an unexpected curve ball when I tell them I no longer drink.
What has been off putting, is the lack of seriousness when I drop the heavy news. "Yea, I have been in Beaufort. I almost died, last fall", I tell them.
"Ha, ha. You should take it easy", has been a common response.
Although, I reiterate the event of my near death, the conversation moves on, and is completely ignored. I don't expect anything from these acquaintances, I only find it odd that some things can be so easily brushed off.
However, I have seen some friends who were close to me over the years. Many of them haven't seen me since I was on my death bed. They have failed to be supportive, or congratulatory of my startling, and unexpected recovery. I simply cannot wrap my head around what must be going through their minds. I knew this was coming, as other addicts have told me, yet it doesn't make it any easier to deal with.
It has been a long, and difficult nine months, but overall I am extremely happy. I feel good, I am on my home turf, and actually mingling with people. Yet, most importantly, this is my first real test with being out on the town, among the ever present alcohol. There have been no urges, whatsoever.
Finally, I am staying with the new girl. She is someone I have known for quite awhile, but a real connection has developed with my sobriety. Without drinking, I am happier than I have been since...
I can't even remember the last time I was this upbeat, and lively.
Come to think of it, it takes about nine months to grow a new human body. This is my second.
Alcohol was not my friend.
Photo: Tim Todd Driving The Chair
About These Stories