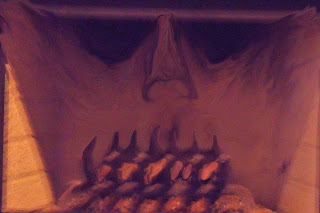 My mother and stepfather have been here so often, its easy to forget that they don't live close by.  They live 70 miles south of my Charleston hospital unit, in Beaufort, South Carolina.  The two of them are here more often than not, and I am quite used to them being here.  Yet, I am still surprised, at first, on the few nights they simply can't make it.  Its not that they don't want to, but its not just a jaunt up the road and back.  A daily round trip of 140 miles would wear anyone out.

Kevin drops is to 'hang out' with me tonight.  He brought my CD player, and all of my CD wallets.  I don't have the dexterity, or the mental capacity to attempt to sort through the music.  He sits the player on the floor to give me time to work it out.  In typical Kevin fashion, he has also carried in some movies.  He tries to hook some kind of contraption to the television, but I guess all of the inputs are taken.

While he is fiddling with the electronics, I notice what looks like my CD wallets hanging on the wall.  I must be losing it again. Either way, that would mean the player is out of reach, and the CD's are out of reach.
It doesn't appear that we are having any success on watching a movie, so Kev just sits on the couch next to the bed.  That's when I notice a breeze pull into the room, and I get a chill.
I look left, without moving my head, towards the window.  I don't want Kevin to see me checking out things that may or may not be there.  I truly believe it is cracked open, so I have to say something.

"Kevin, I'm getting a bit chilly.  Will you close that window over there", I ask?
"I don't think those can be opened, dude.  You know.  For safety."
"I don't know Kev, it looks like it might be cracked, and I kind of feel a breeze", I say.

He pushes his knees when he stands up with the sound we all make while sitting or standing.  Age usually determines the volume and duration of the stiff joint sigh that is exhaled.  Kevin's not old, but he does make the noise.  A precursor to aging, I suppose.  He approaches the sill, and gives the window a tug.  "See.  Its closed.  Locked tight", he says.
It still looks open to me, but I agree with him anyway.  "OK.  Thanks, man."

I think that most of our conversation involves me twisting my body, and grunting towards Kevin.  "I'm sorry I'm not much to talk to.  I just..."
He responds the way he always does, "Don't worry about it, bro.  Its OK."

Kevin is probably watching the TV, and I am looking at the wall.  Except, sometimes I am still sneaking peaks at that window.  It seems like there are people there, now.  I know that we are on the eight floor of a hospital, but the people are dressed in gowns out on the terrace.  Two tall and beautiful black women are being coached into my room by someone who looks to be their brother.  The brother has on a tuxedo, and is talking them down.  He thinks that it is dangerous for them to be out there.

I turn to Kevin again, "Hey, why do you think those people are out there?"
"I'm not sure, but I wouldn't worry about them too much", he replies.

Wait a second.  Does that mean people are really there?  I just assumed that it was just another hallucination.  That has been the norm.

I don't even know what to think now.  Is Kevin just messing with me, or is he just going a long with my hi jinx.  Maybe he feels like if I don't believe its a big deal, I won't freak out as bad.

How much longer is my head going to have its way with me.  Every moment of everyday is filled with some sort of conversation, or procedure, or anything we all typically do in a day.  Yet, in my current state, my noodle is working overtime.

We are over half way through Autumn.
I want to go outside.  Just for a moment.

About These Stories
Photo:  Fireplace at Aylesford
By:  Donnie Wayne Todd
Enhanced with Adobe Photoshop