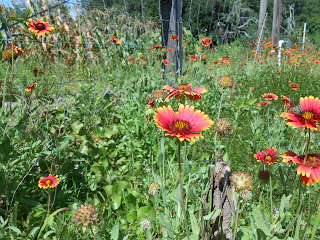 "If I have been of service, if I have glimpsed more of the nature and essence of ultimate good, if I am inspired to reach wider horizons of thought and action, if I am at peace with myself, it has been a successful day."  -- Alex Noble

Not too long ago, in Unknowingly Exhumed, I wrote about a forgotten blog that was brought back to my attention.  Below, is one of those postings.  This is where I was at the time.  Each morning, when I would get home from that bartending gig, I typically would have a couple of more hours before I went to sleep. Either to wind down from the adrenaline of the job that night, or just wait for my pulse rate to go down a bit.  This usually led to listening to music, talking a bit to myself, or posting something like this.

Hi there.  Happy birthday.  Already 58, huh?  Pretty hard to imagine that we got here so fast.  I've been following your footsteps.  Hell, everyone that knows me calls me your full name.  That was to be expected, though.

Yet another year that we should be celebrating; and we're not.  Such fucking bullshit.  I'm sorry that the marker isn't even right yet, but I'm also thinking you'd be telling me to stop worrying about it.  We can't help it though.

It still pisses me off that I'm not allowed to introduce you anymore.  However, this past Monday, Dec. 2nd, I almost repeated that shit with our family.  I am just like you.  I just used another one of my lives.  I fell asleep at the wheel - as you did- for the second time in my life.  However, this time, a 2 by 4 came through my windshield and almost took me out.  --I was going 24 as opposed to the 55 you were going.

I completely totaled the car that you never got to ride in, but I still have my life.  "Don't matter what I got, as long as I got life!" (*I am not sure where this quote is from.  I very well been quoting myself.*)   We do miss you, but you are here.  Donnie Wayne Todd is a name in Charleston, SC, and you know it.

Everything is not what it could be, but when is it?  I thought for a minute that I hit a new low.  That's not even close.  I've had a series of mistakes to learn from.

I remember when you were my age, you really focused on getting yourself in shape, and trying to take care of your asshole eldest son in your own way.  --Don't forget, I knew everything.  Yea, right!

I have met a few companions.   You met a couple.  I just wish you had seen me follow through.

I started a new job in August.  Within a few days, I went to meet a prospective co-worker.  -- I still remember the very first words.  That's because that's the way MY family taught me.  You all made it so easy to talk to anyone, and figure out who is who right off the rip.  (She's still an amazing friend by the way.)

Whoever I hug today will be for you Donnie Wayne Todd, Sr.  Feel it!  I know you're short, but get over it.  You were short by the time I was 13.

Just don't forget to keep feeding me your advice, dreams, and visions of all of us at 409 South Pandora Drive.  Me, you, mom, Tim, Tinker; maybe Sissy, if you want to get real early, and that's just the beginning. (*Tim is my brother, and Tinker and Sissy were two dogs from my childhood.*)

Help me tell them all to stop sweating the small stuff, and watch whats going on.  You never know if you're not going to be able to later...

When I wrote this, there is no way I could ever imagined that I would end up on my bedroom floor, almost five years later, bleeding to death.  Yet, I hadn't changed much, the amount of alcohol it took to get me drunk had increased remarkably.
This all comes back to what I just wrote a few days ago in The Long Chat -2, comparing the ages we both were, when events like these went down.

My birthday is June 16, which occasionally falls on Father's Day.  This weekend has been an extra crunch on my mind, and psyche.  Yes, I did quit drinking, but not that long, ago.  On October 17, 2011, I was unknowingly on my bedroom floor for the second day.  I was sent home with my mother, and stepfather in November to die.

Thank God, I survived, yet, this weekend, I have a undercurrent of fear, and emotion, and worry about dying for the first time since February.  I am really not sure if I would have been found yesterday, if I my physical collapse was this weekend, and not last fall.

Living life as if it is your last day is a hard sell.  I am starting to think that unless one is threatened by Death, they never will have the perception that I have.

For me, this was not just any other weekend, however my point of view is unique to myself.
It is a painful reality that all things have returned to the typical way of living.
Work, school, shopping, laundry, children, showers, sleeping, and calling your father
merely because it is Father's Day.

If that is too big a drag,
then there is Facebook.

My mind is a firestorm, run wild,
and there is plenty of fuel left to burn.

About These Stories
Photo:  Carolina Wild
By:  DWT