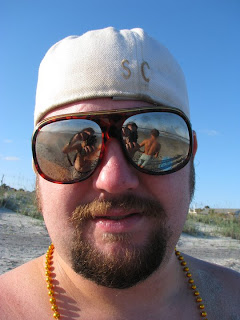 My hospital cell should have a revolving door installed.  Yet, the company is not all needles, pricks, and dead people.  My friends and family are here on a constant basis.  Well, they are here during visiting hours, at least.

Each and every one of them are tremendous, and much needed emotional boosts.  In and out, throughout the day, asking me what I need.  "Anything you need, DWT.  Anything."

The utterance, "I love you, Donnie" never wears thin, and is at no time heard by an unappreciative ear.  The words don't comfort me for want of attention.  Those words are warming because I know they are truthful.  My team is not holding me up out of pity, even if they don't like seeing me this way.

For unknown reasons, my main requests are peaches, and chocolate milk.  I have always liked both treats, but never to an obsessive extreme as this.  If its not peaches, I want any fruit.  However, in the midst of all of the chaos going through my body and mind, I remember that I should not have any melon.  Apparently, I saw a news story somewhere that spoke of tainted melon.  So then, I wouldn't want to ingest something that might be bad for me.  That's just not in my nature.  Whatever.

On one particular occasion, my aunt, and my cousin are here to visit.  My aunt never ceases in her attempts to comfort me, while stroking my hair like a mother.  She is my mother's sister, so she's known me since before I was even a thought.  I can tell that she is very upset, and it is very difficult for her to see me this way.  I can hear it in her voice.

My aunt and cousin search everywhere for chocolate milk for me.  I'm not even sure for how long because one of my best has shown up.  Lance is sitting in a chair facing my bed, and the television.  He's in a good mood no matter what.  At least, that's the way he makes the room feel.  I may have this wrong, but I think he keeps telling me, "You don't look so good, Todd."  Always speaking with what I think Elvis would have sounded like, if he were from Kentucky.

Lance brought along some candy bars.  A few varieties of candy bars.  "Take your pick", he says.  The next thing I know, my buddy is hand feeding M&M's into my mouth.  I don't even have the coordination to help with this.  He almost has to put his palm over my mouth.  Just when I am thinking this over he says, "Donnie, you know I could kill you right now."  Its not scary when he threatens my life, its funny.  Its damn funny.

"You wouldn't be able to do anything about it", he laughs.  "I could just take one of those pillows from you.  Put you out your misery."

"OK.  I just wanted you to know that.  Remember that, alright.  I can kill you anytime I want", he reiterates.  "You want some more M&M's?"

As L has his hand to my mouth, my aunt returns.  She has found chocolate flavored, and white milk.  They are in little half-pint cartons.  She insists that I drink the milk out of straws, while she feeds it to me like a toddler.

Its all very sweet, but I'm just waiting for my pal to say, "I'm going to put your face on the back of one of those milk cartons."

Only he could make someone comfortable, with the most inappropriate comments.
About These Stories
I can handle that.