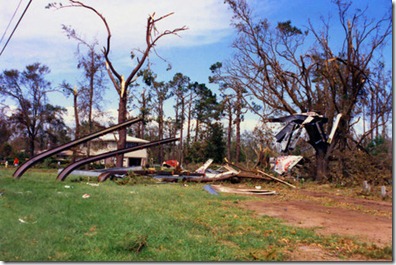 It is not even hurricane season, yet we are experiencing a tropical storm already. Tropical Storm Byrle will bring 30mph winds, some needed rain, and not much else. Hurricane season doesn't officially kick off until June 1, with the most frequent months being August and September.

A tropical storm doesn't stir up too much excitement around here. Even a category 1 storm doesn't get everyone into much of a fuss. We are getting a few bands of heavy rain, and it has been windy, but there was a lot of sunshine today, too.

Now and then, there is The Big One. The last big one that hit Charleston was Hurricane Hugo. That was September 20-21, 1989. The storm was so large the image of it covered the entire state.
It was a slow moving Category 3 storm.

Category 3 is when the weather service begins to call the system a Major Storm. Sustained winds of these monsters are 111 and 129 miles per hour. Yes, sustained winds. When you add the gusts, they could be as fast as 160 mph, and contain many tornadoes.

Hugo hit overnight. It lasted the entire night, and our windows were boarded up on our wood siding house. The steady rumble of the wind was the scariest part, as the wood made high pitched screeching sounds as the wood on the house flexed. The power went out early, and the storm surge covered downtown Charleston, South Carolina.

After the storm passed through, we didn't have water for three days. We couldn't even leave our street for all the trees. We didn't have electricity for 3 weeks, and that led to martial law with a curfew. Too much looting.

When we finally did have water, it smelled and tasted of pine for months. Thousand of pine trees had fallen into the reservoirs. My cross-country team still tried to get practices and meets in, although school was out.

Just when we were starting to get a grip on things with help from The National Guard, The San Francisco/Oakland earthquake hit California a month later.

The National Guard had to leave,
and we were on our own.