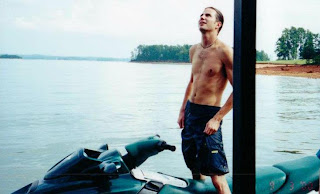 I'm learning to walk, again.  I never thought this would be an issue for me.  Maybe when I'm older, but now?  I've literally become The Walking (Nearly) Dead.

As much as I'm enjoying the view of the hospital's courtyard, we have to get back.  Its hard enough to stand and I have to go back the way we came.  I'm still gazing through the window when I try to twist myself clockwise to get moving.

From my viewpoint, the entire floor suddenly dips downward to my right.  It really feels like the entire building is moving.  Its a good thing my physical therapist is here.  Otherwise, I would have a solid tile burn on my face, and I didn't take any Dramamine.

Stand up straight, don't fall backwards.  No, its this way.  We made two right turns to get here, and I've forgotten how to get back to my room.  I'm sweating profusely, and breathing hard.  My mouth hasn't been this dry since my friend's four day bachelor party in Vegas; in August.  At this point I appreciate the cool and sanitized air.

When we are almost to my room, my Drill Sargent stops me short.  She's trying to twist my shoulders clockwise when she says, "We're going in here."
Oh.  They switched me to a different room.  "All my stuff is in my room."
"OK.  Its in here, right where you left it.  You've had the same room for the last few days."

"Since, you were going to walk farther anyway, let's do some stairs."
What?  She can't be serious.  I just want to get back in my bed.  I don't want my buckshot grits anymore.

When we arrive in the stairwell, I look up and then down.  I hope there's not a fire while we're in here.

"Come on. Just one", she says.
It takes every last glimmer of energy for me to pull myself up with my right foot.
"Great!  Now, bring up your left foot."

She's not asking me to go to another stair.  Her only request is that I get both feet on the same step.  I pull with my arms, and rest my body on the handrail.  I can't do it.

This is what I've let alcohol do to me.
For as long as I can remember, I've been active.  For starters, when I was really little, we had 4 channels on the television, and no video games.  We played outside.  Imagine that.

By six years old, it was little league.  Then boxing, and karate.  I started to run competitively at ten years old.  After that, there was soccer, basketball, and swimming.

By the time I was sixteen, I had finished 333 out of 6,000 in The Cooper River Bridge Run.  I was running 80 miles per week, on the cross country and track teams, and competing in 1/2 marathon races.  All the while, I was earning my Life-guarding license.

By the time, I was 22, I had stopped running.  I began to drink more often, smoking a lot of weed, and an occasional acid trip.  My girlfriend at the time was on my case for it.  She would say to me, "You're going to end up like your Father!"

As you can imagine, I didn't like that.
"My dad is a good man.  Besides, I would never drink as much as he does.  You're paranoid, and blowing things out of proportion."

For the longest time, I was right.  I'm not saying I didn't go on some serious benders here and there, but I kept my drinking under control.
Well, that was then.  Now, I just want to crawl back in bed.  I don't want to think about it.

When I finally get back to the room, I have to twist around like a drunken ballerina, again.  All of my tubes and wires have to be positioned just right.
I lean back in my bed while they are hooking up a little bag to my IV collection.  They tell me its going to feel a little cool going in.

I don't even catch my breath before I am back in slumber-land.