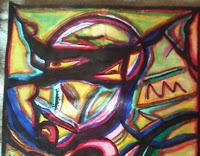 This Story Refers To My First Visit Back To Charleston in April 2012.


Until this past weekend, I had not returned to Charleston for anything more than to visit MUSC.  You know, the normal everyday visit to find out if the hole in your esophagus is still closed.  I've missed all of my friends and so-called(s), but I really haven't been healthy enough to just go and hang out.
My mother was scheduled for a trip to Myrtle Beach to update her optician's license, so I could just hitch a ride with her.  We originally planned to  just stop by Kevin's place along the way.  I used to live there with him, but I hadn't seen it since my long term alcohol use suddenly set off an M-80 in my throat.

However, the night before we were to go, Kevin got word at AC's that they would need someone to set up the bar. He could leave when another bartender got there.  Normally, this wouldn't be a problem, but just like everything else since October, this is not the norm.  Since, my mom was on a restricted schedule, that would put us on James Island at about 10a.m.

Kevin wouldn't be done until 11:30 or so, and that would result in 90 minutes of alone time for the apartment and I.  The thought of this didn't sit well.  A surge of gripping anxiety rushed up my shoulders into my chest almost immediately.  I did not want to confront those demons unattended.
The memory of my blood spraying out of my mouth is still very alive and vivid.  I had yet to see where Kevin found me.  So far, we only spoke about that afternoon in a general way.  Without saying so, I think both of us thought it better to have that conversation in person.  Showing an absolute trust in her son, or making a terrible mistake were laid out for my mother.  With that trust she would drop me off at Kevin's work; the bar where I used to work.  Kind of a big deal.

After Kev had finished up we went to grab a bite, and he started to reveal what he saw.  I knew the general scenario, however it was much different seeing and hearing him describe it.  He began with finding my door locked, but went into detail about what went on for him.

After he called for me, and there was no response, he made his way to the bathroom door that led into my bedroom.  He started to push on it, and it felt like the door was dragging, or something was lying against it.  This is when he saw my foot.  He began to talk of the first glances of my twisted body lying around what he could only describe as bile.
He wasn't sure what it was because it was unlike anything he had ever seen.  It turns out, the nastiness was all of the blood that had been flowing into my stomach.  He slid his way through the small opening of the door, and began to yell at me.  He was shaking my body, and yelling at me as I lay motionless and unresponsive.  He called 911, but feared he was too late.

The ambulance came, and then the police.  The paramedics and the police wanted to know if I was on any drugs.  The paramedics needed to know for health reasons.  I imagine the police were wondering if that were about to have a drug related death on their hands.  Kevin told them that he knew that  I drank, but he couldn't tell them with one hundred percent certainty weather I was doing drugs or not.  I could have been hiding something, as far as he knew.

As the paramedics manipulated my already stiffening body, the cops began ransacking my bedroom.  Kevin describe a furious search for anything and everything.  By not means were they putting stuff back where they found it, of course, and my bedroom became even more messy than your usual addict.

They approached him with a shoebox filled with 24 empty mini-bottles (airplane bottles).  The most disgusting aspect of that is that I thought I had been throwing those away.  I didn't want a bunch of liquor bottles lying around when this day arrived.  I just had a feeling that fateful day was going to be sooner than later.
I drank anyway.  A lot.