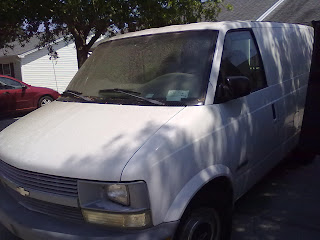 
The Creeper came to be my transportation after finally crashing and totaling my last possession of any tangible value.  Another get out of jail and grave card that was just lumped in with the rest of my alcoholic mishaps.  The HCV (Heinous Crime Vehicle) was a 1999 Chevy Astro Cargo Van.  The Raper Van had no windows on one side, and no seats in the back.

The molestavan had no A/C, and an eardrum piercing AM/FM stock radio.  My step father used it as a bread delivery truck.  His route included Beaufort, Hilton Head, and even Savannah.  At times, he would have to go to Savannah and Hilton Head more than a couple of times a day.  Therefore, The Creepster had over 200,000 miles on it.

On the other hand, my step dad was kind enough to give me this van to use for transportation.  Point A to B.  Since, I rarely drove more than ten miles at a time, this would be perfect.
Sure, I made light of it, and picked on myself for driving it.  Driving that vehicle was just another chink in the armor, reminding me of another preventable mistake I had made.


My vehicle before this was a 2004 Pontiac Vibe.  With all the stock bells and whistles of the 21st century, I loved this car. Cooled off in the Charleston summer heat with glacial air conditioning that would give me goosebumps.  It had a beautiful sea blue exterior, and a more than ample stereo for any rock and roller.  Add, the sunroof, and about 40,000 miles...etc.
I crashed that car.
A two by four came within 18 inches of my face when I dozed off at the wheel.  With little sleep and a solid buzz under my belt, I nodded off and sideswiped a trash pile on Spring Street.  The speed limit was only 25mph, but it came with a customary Charleston width,  Pre-Civil-War width, therefore there was not much room for error.

I was shocked to attention by the loud scraping noise, and stake of tinder in my face.  So, with no headlight, and construction scraps in view, I continued on.  Needless to say, I was in a bit of shock.  After heading over the Ashley River, I pulled over at the next street.  I tugged on the wood, and succeeded only in gathering two hands full of splinters.

My destination was near, and my friend was waiting, so I ventured on.
I pulled into The Tin Roof parking lot, and drew in a deep breath.  Its time to face another embarrassing moment with my caring friend, Bunny Valentine - that's right; nickname and middle name.  When I slip into the bar, I ask her if she will come outside.  Once there, it is the moment of truth, and a look of absolute disappointment and concern.
The words "Damn it, Donnie!" flow off the tongue veritably poetically, and tonight is no exception.  "You need to call the cops", she says.
"But I..."
"Dude, seriously.  We're calling the cops.  Don't worry about it.  I'll talk to them."

In view of the fact that I needed to make sure I didn't hurt anyone, I surrendered.  When the officer arrives, BV sweeps into action, pointing her finger at me with command, "Stay."  She approached the police officer to intervene.  For starters, she says that she is talking to him instead of me because I'm having anxiety.  The officer goes along with this.  Not unlike all of my girl friends, she is attractive, friendly, and witty.  Regardless of some folks' opinion, I believe this makes a difference.  On top of it all, she has a tow truck on the way for my poor car.

Bunny relays the approximate location of my latest carelessness to the officer.  He will need to call for a patrol to sweep Spring Street to be sure there are no injuries or property damage.  Thankfully, there is no visible damage or reports of an accident.

My car is pulled onto the flat bed with about 22 payments left, no insurance, and my ex as a co-signer.  In the meantime, the officer has me sit in the passenger seat of the patrol car, so we can have a chat.  I tell him how I was freaked out, and wanted to call the police to make to double check for any destruction.  Fortunately, all of the breakage is to my car and my ego. I know that he can smell day on me, but the patrol car pulls away while I thank Bunny.  She has more than a few deserved comments for me.  After all, she is my friend.
Once again, I'm off the hook thanks to a good friend, and more unwarranted luck.
Chance Number -- Too Many

Anyhow, today was the end of an era.  I sold The Creeper today.  Its been in Kevin's driveway on James Island.  For more than the 191 days since my years-long alcohol abuse almost snatched the life out of me, The Creeper has sat.

Just like the other dozen cars that I have owned, there are plenty of stories.  There are the numerous times that I was offered pizza and beer on moving day from people who otherwise didn't call me..  There was even a move to Anderson, SC (obviously a close friend).  Also, there was the memorable trip to dinner with a friend, and some of the girls.  Two guys pulled up in that van with a couch in the back, and three pretty girls sitting on that couch.  They were dressed in their evening attire with hotness as they rolled out of the side door with a clown car feel to it.

I also have the many naps I took in the back in between shifts or just to sleep some off before a drive.  Often, I would just lie on the clutter from previous moves, drenched in perspiration from every pore. Thrown in, is a two month stay on Folly Island receiving no tickets, tows, boots, or attention in general.  There was just the occasional comment from locals, "Hey dude.  You're van's been on Folly for awhile."

To the bitter end, The Creeper was a thorn in my side.  When I went to Charleston yesterday to have it removed, the company had me wait for close to three and a half hours instead of the promised sixty to ninety minutes. They were not showing, and not answering their phone.  Irritating.
Eventually, the John's Islander answered my call.  He tells me that the tow truck is broken, and he's having a hard time communicating with the driver.
"He had to go to the dealership.  There is a vacuum hose for the pump that pulls the cable.  You know?  It might take a minute."
No kidding.

I tell the friendly and talkative man that I have to return to Beaufort.  When I tell him I can leave the title with Kevin, he asks me if I can trust the guy who has continuously taken care of my ass - The Lifesaver.  I trust him.
This morning, Thursday April 26, 2012 The Creeper moved on.  Most likely, it will be used for parts, and find many homes..
Thank you Creepy Molester Van.
Thank you.
About These Stories
Written by Unknown